This word use to simply refer to a freshwater/marine fish.

In the last decade the term has become much more complex. It now has a second definition: A person who lures someone into a relationship using a fake persona. On the MTV show “Catfish,” the hosts Nev and Max make it their mission to find these deceivers and figure out the purpose behind their fraud.

Benson-Allott says Facebook is “a database of personal information, an ever-expanding archive of profiles, status updates, wall posts, and photos” (55). The hosts of “Catfish” don’t use any fancy techniques to hunt people down. They use social media platforms like Facebook, Twitter, and Instagram because they provide all of the information they need to find someone.

It’s simple to create a fake persona online. A person can easily steal pictures and create a new identity on various social media platforms. Many people are not comfortable in their own skin and look for a way to escape from reality. Lovelock explains “Through the intervention of the program the catfish vow to work on learning to accept their “real” selves, and to represent themselves “authentically” online in the future” (205). But this raises a question: Can anyone ever be 100% authentic on social media?

This issue matters. It’s not just about one person deceiving another person online. First of all, it shouldn’t be this easy to do. If you timed me, I could create a fake Facebook profile in under five minutes. The reasons people choose to do this are something we shouldn’t ignore. Yes, many of them do use fake profiles for deceptive purposes. I never thought I would feel bad for the catfishes on the show, but some of their stories and explanations are heartbreaking. Their authentic profile may not receive the positive feedback that their fake profile does. In the end people have to realize that living in a “Black Mirror” kind of world where everyone scrutinizes one another is dangerous. But we’re not far from it.

We should strive to live in a world where our “online” and “offline” selves are no longer distinct.

Turkle opens her TED talk with a paradox. It’s the idea that people love texts but complain about texting. She mentions how her daughter was an innocent five-year-old when she was giving her first talk. Technology was still experimental for the most part. Today her daughter sleeps with a cell phone (relatable). While the thought of exploring technology still excites her, she believes that it is taking us places we shouldn’t go. Our cell phones may be small, but they are quite powerful. They change our identities. A few years ago we might have found some of our digital habits disturbing or odd. She provides the example of people texting during corporate business meetings. We are able to do things so discreetly. But why is there such an urgency? What is it about the digital world that is more compelling than the real world?

The concept of “being together while not being together” is seen everywhere these days. I will often sit in a classroom full of students waiting for the professor to arrive and everyone will sit on their phones rather than make conversation (which shouldn’t be too difficult since they are taking the same course and obviously share common interests). Turkle thinks we’re headed down a dangerous path…and I agree. This “Alone Together” was compelling mostly because it’s so relevant. I try not to take part in this trend but it takes more than one. My friends have more trouble than I do when it comes to putting their phone away while we’re hanging out. I don’t understand why people feel the need to use their devices when they have great company right next to them. I can understand how people may feel uncomfortable about making conversation with a complete stranger, but true progress will be made when we start stepping out of our comfort zones rather than turning to our devices as a safety net. We need to learn that it is ok to not have control all the time.

Wesch has a similar view as Turkle. He drives home the idea that genuine connections are better than any kind of digital communication. He talks about moving from “knowledgeable” to “knowledge-able.” Basically he thinks we should be able to take our knowledge and apply it. The application step is what matters most.

Over the past few weeks, Mark Zuckerberg memes have been floating around the Internet.

Here are a few of my favorites: 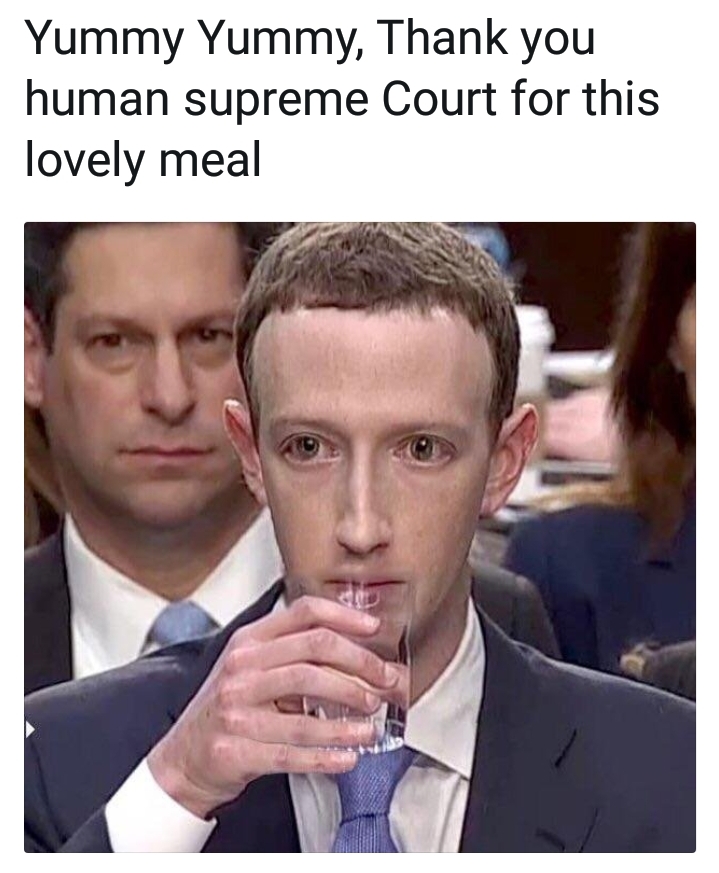 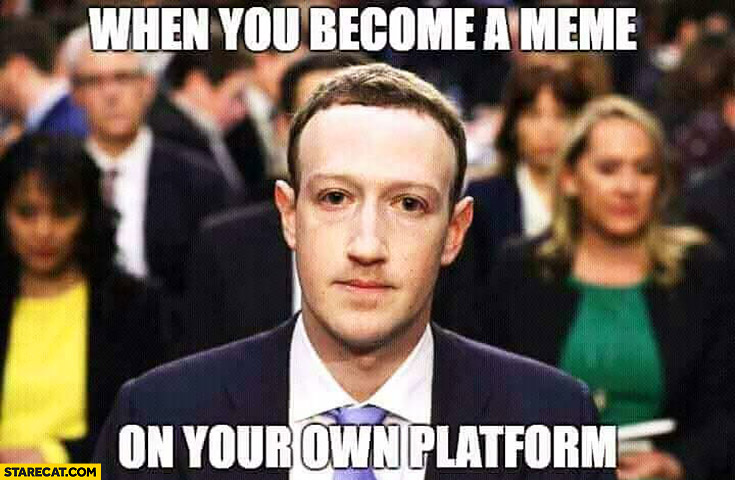 When I was given the task to create my own meme, I was extremely excited. The memes that I like to look at are ones that make me laugh. I knew I wanted to create something humorous involving the Facebook/Cambridge Analytica scandal. I couldn’t seem to get past the idea that Cambridge Analytica took friend of friend’s information. Therefore I came up with the caption “When your Facebook friend tells you they took the Cambridge Analytica personality quiz” and searched for a photo with someone clearly annoyed/disappointed.

This was the result:

I loved creating my own meme and seeing what my peers came up with. It’s a simple and fun way to get across serious political messages. So many people complain about politics…They talk about how boring or confusing they can be. But memes are a way they could understand better and possibly become more interested.

A troll is a person who purposely causes disarray online. Many of them use hate speech to evoke some sort of emotion from the platform’s users. Some think they are exposing the hypocrisy of mainstream media. For example, a troll who posts an inappropriate picture on a Facebook memorial page may be trying to make a point that people pretend to care about the deceased in order  to get attention. This extreme example shows a troll’s lack of empathy. They feel confident enough to say these horrible things because they feel safe behind a screen. Their confidence is especially high when they remain anonymous.

The United States is a country that promotes free speech in person and on the web. Therefore, it is not easy for these trolls to be shut down. People are allowed to have their opinions, whether they are being genuine or posting for more diabolical reasons.

The Privacy Dialogues interviews were intriguing. I found a lot of similarities between my interviewee and the people my peers interviewed. It seems as though these breaking stories about technological invasions and information robbery have little effect on people. After interviewees were made aware of the Cambridge Analytica and Facebook debacle, many did not consider deleting Facebook or even changing their online habits. It’s like your mechanic told you that your car has problems but you refuse to fix it.

Although it is scary to see the naivety of Facebook users, I am in the same boat. Unless something detrimental happens, I will continue to use this social media platform the same way I have been using it for the past ten years. I’m definitely a fan of Domain of One’s Own because I have much more control over my accessible data. I love the fact that it can exist after its educative purpose is fulfilled. I can express myself in various ways using text, pictures, video, and audio. This domain is not some hard-copy record of progress that needs to be transferred through different systems. It is a digital portfolio that can be taken wherever you go.

The creation of an individualized domain can be connected back to the issue of privacy. These domains are a result of people wanting more control of their information. Interview responses made it clear that people are concerned about their privacy, but most of them do not care enough to do anything about it. This can be a simple solution for those people that do not want to abolish their social media profiles. They can develop a more private space where they can confidently share their ideas.